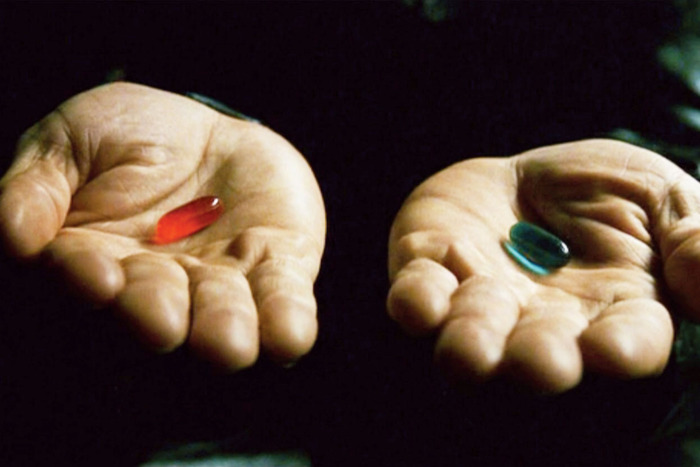 I remember the first morning after I had given my heart to Jesus.  I had gone outside of our Montana home and was standing looking at the Canadian Rockies to the north when I became aware that something was different.  It wasn’t the view of mountains in the distance or the warmth of the morning sun that impacted me but a calming peace that I had not known before.  I could not deny that something had transpired within me, a dramatic shift had taken place that later I could only describe as if I went from a black and white existence to one of color.  As I tried to understand what had happened somehow I knew that it was all tied to the simple prayer I had said the previous evening.  I felt like Neo in the movie ‘The Matrix’, I took the red pill – …and I was soon to see just how deep the rabbit-hole goes.

The experience within me was so dramatic that I began to devour the Bible each day hoping for a clearer understanding of just what it was that had so radically transformed my life.  My desire was to find out what I must do now that I was a Christian.  The feeling that I had been translated from one world to another caused me to wonder how I should, not only communicate with others but how I was to assimilate these new thoughts that were in my mind.

The Bible introduced me to a whole new world along with a transformed lifestyle.  I found myself standing on unfamiliar ground trying to assimilate myself into these new ways of acting, speaking even thinking that were previously alien to me.  I found that when I did fall back into old patterns that I would feel convicted over things that previously would not have caused me any feelings of remorse.  I became very protective of this thing within me as if it was sacred and must be honored and respected.

I knew the Bible was my guide but at times I found it confusing. Who were the Nephilim?  Why did God appear so angry at times?  What was Israel’s problem?  There were times even I wanted to wipe them all out and start over.  Soon I left the Old Testament and made it into the New Testament feeling like I had crossed a chasm into something familiar.  I had found my Jesus, not in a vague reference but the personhood of the one whom I had chosen to follow.  There were still things that needed explaining and though I sought out people to help me understand I soon saw that there were different theological camps with differing interpretations.  I also saw that some camps were distrusting of the others with each having their own practices.

I loved reading all the stories of the miraculous things that Jesus and his disciples did and I was excited to be a part of something so wonderful.  I couldn’t wait to start doing the stuff that Jesus and his followers had done.  Shortly afterwards I asked one of the men who had presented the Gospel to me when could I start doing the stuff I had been reading about.  He shook his head explaining that those things do not happen anymore since the apostles died and especially since the canon of scriptures had been completed.  Though he didn’t use the word cessationist, it was the first time I had become aware of the term.  It was like I had taken the blue pill and the story ended, and I woke up in my bed, believing whatever I wanted to believe.  (Matrix)

Other things were happening to me that I couldn’t explain.  I was attacked one night in bed by what I knew was a demonic spirit.  It had tried to choke me as I slept but somehow I knew that if I could just say the name of ‘Jesus’ it would have to leave.  Though I couldn’t speak I knew if I could just think his name in my mind it would help and as I did I soon was able to speak out loud the name of Jesus.  The demonic spirit left me but I knew that either the Kingdom I was a part of was at war with another kingdom or the cessationist had forgotten to tell the demonic that the they were not needed anymore.

I learned that though a cessationist believes the Biblical accounts in the scriptures including the supernatural aspects to be accurate, they just do not believe they happen any longer.  They do believe God could work miracles today but they have little expectation that He would do so.  The sad part is a cessationist does not believe that the gifts of healing and miracles happen anymore because if they did then new doctrines could be given allowing the canon of scripture to be changed.

This was in direct opposition to what Jesus and his disciples taught as it related to the Kingdom of God.  Not to mention what the scriptures say concerning the Holy Spirit’s role in directing individuals after salvation.  I began to ask myself, how did the church stray so far from the word of God to have arrived in a place where the basic tenants of our faith are not practiced anymore?  Luke 16:15-18

And I show you How deep the rabbit-hole goes?

I found it didn’t just happen overnight, in fact for nearly 300 years after Jesus rose the church was known for accepting all races and classes of people and loving them as Jesus loved the church.  They also cared for the poor by selling what they had and making it available to those in need.  The church offered eternal life through Jesus death and resurrection and set high moral standards through the work of the Holy Spirit in the life of the individual.  They were a perfect picture of what the New Testament church looked like.

Acceptance into the church was based on repentance for sin, acknowledging that Jesus was Lord, being baptized, and receiving the Holy Spirit.  A changed life was the acknowledged norm for entrance into the family of God.  However that was soon to change when in 313 A.D. the Roman emperor, Constantine converted to Christianity.  Before that the persecution that the church was under kept it pure and undefiled.  Constantine legalized Christianity in the Roman Empire making it easy for nominal members to seek membership without experiencing a genuine conversion.

What altered the views held within the early church can be attributed to the teaching of Augustine.  The church up to Augustine and for a while after him had what is termed a ‘warfare worldview’.  In other words the church believed that forces of evil were at war against Christ and His Church.  This warfare was behind all sicknesses and demonic bondage’s people experienced.  It also gave the church the understanding that through the power of the Holy Spirit the believer was to come against all sickness, disease and demonic oppression.  A large percentage of those healed by Jesus in the gospel accounts came through Jesus casting out demons and evil spirits from the individual.  The early church believed in and practiced a ‘warfare worldview’.

Augustine however believed in what has been termed a ‘blueprint worldview’ meaning, everything that happens is predetermined by God.  Having this worldview changed how the church originally regarded healing.  Fortunately there are theologians that are now leading the church through a paradigm shift bringing us back from the ‘blueprint worldview’ to having a ‘warfare worldview’.  Understanding that we are involved in a cosmic battle between good and evil changes how we see our role as God’s disciples.  The blueprint worldview assumes that there is some kind of mysterious, loving and divine plan that is behind every evil event in our world.  This encourages an approach to evil that defines it as an intellectual problem to be solved rather than a spiritual problem to be overcome.

We leave you with these words written by Paul in 1 Cor. 2:4-5, “My message and my preaching were not with wise and persuasive words, but with a demonstration of the Spirits power, so that your faith might not rest on men’s wisdom, but on God’s power.”  May the grace of the Lord Jesus be with you and may His presence encourage and protect you.