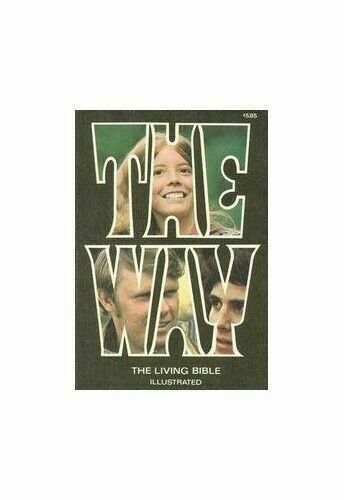 Recently, I was watching the first season of the Disney show, ‘The Mandalorian,‘ when I kept hearing the phrase, ‘this is the way,’ being repeated.  What struck me was that it was not the first time I had heard that specific phrase used.  I first saw it written on the cover of the first Bible I owned named, interesting enough, ‘The Way.’  The Bible does not use the word ‘Christians’ when describing Jesus’ disciples.  The phrase ‘followers of the way‘ is the term used to describe themselves.   You can find it seven times throughout the book of Acts 9:2, 19:9, 23; 22:4.  Paul used it when he was brought before the Roman governor, Felix, saying this about himself.  “I admit that I follow the Way, which they call a cult.“ (Acts: 24:14)

Though its use is not precisely the same as in the show ‘The Mandalorian,’ there are similarities.  As I researched the term, I soon understood the context in which the writers of the Mandalorian had intended for it.  It was a mantra they used as a reference for preserving their way of life. ‘The way‘ included hiding out and living underground and sticking together at all costs. The phrase also serves as a connection of sorts, helping them remember and live out their core values.  It became apparent that if a Mandalorian did something that represented their deeply held values or beliefs, they would say, ‘It is the Way.’  Maybe we should ask ourselves what the early disciples of Jesus meant when they used the term, followers of the way?

It was important for believers of the way to believe certain truths and live a certain way.  Right belief and right living are essential if we are to be Christ-like, imitating our Lord and Savior by living lives of compassion, love, humility, patience, and virtue.  In John 14:6, Jesus said that he is “The way the truth and the life.” Later we see Aquila and Priscilla explaining to Apollos in Acts 18:26, “The way of God more fully.“ And in Hebrews, it says that Jesus’ broken body is the “new and living way“ Hebrews 10:19-20.  John the Baptist proclaimed, “Make ready the way of the Lord,…”

I wonder if our response to a situation would change if we were to associate each thing we did as being what Jesus would do.   As followers of the way, the thought that we would have to explain our actions might cause us to think before we acted.  Do we make our decisions based on God’s values and beliefs, or do we put our faith in the Kingdoms of this world?  One wonders who is it that Jesus would suggest his followers show their allegiance.  Would it be the Roman governor of Judea, Pontius Pilate?  The King of Judea, King Herod the Great, who by the way was a practicing Jew?  Or the Jewish high priest, Caiaphas?  I am sure some can and would make a case for each of the above.  Just like a case can be made for either Trump or Biden.  But maybe Jesus’s kingdom, which is not of this world, and whose values and beliefs are not even close to the world’s kingdom, would choose none of the above rather than attempt to justify one over the other.

Let’s take a look at the seven-mountain mandate for a few minutes.  The seven mountains represent the seven aspects of society: Education, Religion, Family, Business, Government/Military, Arts/Entertainment & Media that the Church must influence if it expects to transform society.  The question we need to ask ourselves is this, is the hope for the world found in God’s Kingdom, or is it found in the world’s kingdom?  It is either one or the other, but it cannot be both.

If you are asking if this is ‘The Way’ that Jesus expected his disciples to influence society, you need go no further than Matt. 4: 8-10, “Again, the devil took him to a very high mountain and showed him all the kingdoms of the world and their splendor. “All this I will give you,” he said, “if you will bow down and worship me. Jesus said to him, “Away from me, Satan! For it is written: ‘Worship the Lord your God, and serve him only.”  My thought is this; if Jesus turned down the offer of receiving not just one but all seven mountains of influence, perhaps Jesus saw the danger the Church faced by being seduced by the kingdoms of the world to the point of bowing down and worshipping them.  If this is the way that Jesus looked at it, then it probably should be ‘The Way’; we need to look at it as well.

Though Jesus calls his followers to be lights in the world (Matthew 5:14), there is nothing in the Bible that requires or encourages us to dominate world systems to make them more like God’s Kingdom. The Bible, in contrast with this teaching, says that in the last days, the world will be further from God’s ideal rather than parallel to it (2 Timothy 3:1, 13; 2 Peter 3:3). It is the way for us to actively share the gospel of Christ and be His ambassadors in a lost and dying world (Matthew 28:18–20; 2 Corinthians 5:17–21). We should be having an impact on society, but not through domination or forceful change. Instead, we are to share the love of God with others, stand up for His truth, and eagerly await Jesus’ return when He makes all things new (Revelation 21).  Rather than ‘Make America Great Again,’ or ‘Build Back Better,’ may we focus on Him and His presence and the peace only He can give as we Make the way Relevant and Alive in a dying world.

May we not forget what Jesus said in John 18:36, “My kingdom is not of this world. If it were, my servants would fight to prevent my arrest by the Jewish leaders. But now my kingdom is from another place.” As we draw closer to the celebration of the birth of our Lord and Savior, it is good for us to remember that Jesus tells us in Ephesians 5:25-27 that we are His bride.  And in Matthew 16:18, Jesus declares, “I will build my church, and the gates of hell shall not prevail against it.”  In Romans 8:38-39, we are reminded “For I am sure that neither death nor life, nor angels nor rulers, nor things present nor things to come, nor powers, nor height nor depth, nor anything else in all creation, will be able to separate us from the love of God in Christ Jesus our Lord.”

Our prayers for all, especially at this time at the end of the challenging year of 2020, are to be so consumed and saturated in the presence and the peace of God that we are overwhelmed by Him and the goodness that comes only from tasting and experiencing His love afresh. That we are indeed returned to our “first love,” and the kingdoms and cares of this world are made small in the manifestation of His glory!

Glory to God In The Highest and on Earth Peace and Goodwill to all Men! Our Savior Our King Reigns Forever. May we Exalt Him Above All Else!

If you have been blessed by our articles and know of someone who would benefit from receiving ‘Keys to Kingdom Living’ please forward this article onto them.  Or simply tell them to go to our web site, http://www.klifemin.org, and scroll down the right side of the page and click on which method they would prefer receiving their copy of the newsletter.

We also appreciate your letting us know if you enjoyed it as well so either bless us with a comment or hit the ‘like’ button.)

If you enjoy our articles, please prayerfully consider making a $5.00 donation to our coffee fund below.