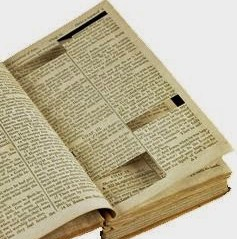 The first Bible I studied after becoming a Christian was Lois’s copy of the ‘Living Bible’.  I didn’t know much about Bibles other than the big white one my parents had stuffed into their bookcase.  It was full of ‘thee’s and thous’ which made reading it like reading an old Shakespearean play.  The Living Bible on the other hand was much easier for me to follow because it took out all the old archaic terms and replaced them with modern terms that I was familiar with.  A year or so later our pastor handed me a copy of the NIV Bible which I have been reading now for over thirty years.

I didn’t realize it then but there two kinds of Bible’s, one is called a translation while the other is called a paraphrase.  The Living Bible is referred to as a paraphrase which means it takes a completed translation, typically in English and substitutes other words so that it is easier to culturally understand.  The NIV is not a paraphrase edition but an actual translation, meaning they studied the original languages of Hebrew, Aramaic and Koine Greek and changed it to English.

There are quite a few Paraphrase Bibles available like the Amplified Bible, Living Bible, Good News Bible and The Message Bible.  In fact there are between 40-60 English language versions of the Bible available today.  I like to refer to them every now and then when I want to get a different perspective on a particular verse I’m studying.  Of course we should be cautious using them because the authors of these versions of the Bible use ‘poetic license’ in their interpretation of biblical terms and passages.  Most of the Paraphrase Bibles we use are relatively new, compiled from the 1950’s onward.  Whereas the KJV was first translated in 1611 and underwent a major revision in 1769.  Even the New King James Version has only been available since 1982, which in Earth years hasn’t been that long.  Scholars agree that the KJV and NKJV are word for word translations and have been found to be 98% accurate with the Dead Sea Scrolls and other manuscripts that the KJV was based on.

A little over a year ago, as the words in my Bible began to shrink in size, I came to the conclusion that a ‘large print’ Bible would be helpful.  I began to search for a Bible exactly like the one I was currently using, except with larger print.  It didn’t take long before I discovered that the newer editions of my Bible as well as ‘other Bible’s’ had gone through a revision where they had been made to be more gender friendly.  For example some changed (father to parent), (son to child), (man to mortal).  Some have added words and phrases not found in the original text like, (brother to brother or sister), (brotherly love had been changed to love as brothers and sisters), (Men of Israel becomes fellow Israelites) and Jesus’s incarnation from (likeness of men becomes likeness of humanity).  I was shocked to learn that some Bibles had made gender-neutral changes to their translations in over 100 places.  Once I was aware of these changes I began to search through my earlier edition of the NIV to see if it also had these gender-neutral changes.  However I soon discovered something that I found even more alarming.

I was looking at Luke 4:4 and noticed something was missing.  Originally it had been written to say, “Jesus answered, “It is written: ‘Man shall not live on bread alone, but by every word of God.”  Now the phrase “but by every word of God” was omitted.  I was sure I had read it there before so I did a search for the phrase and found the same phrase, in its entirety in Deut. 8:3 and Matt 4:4, but if it is alright to have it in those two places why remove it from Luke 4:4.  I also discovered that in Mark 1:17 where it says in the NIV, “and I will make you fishers of men” has been changed in the 2011 edition of the NIV to ‘I will send you out to fish for people.”

I found out that manuscripts predating those used in the original KJV had been located  and after a close examination by biblical scholars they determined that words and phrases used in the original KJV had been either intentionally or accidentally added.  The consensus of these theologians was to remove these scriptures from the newer translation since they felt they were of minor consequence and would not change the crucial themes found in the word of God.  It is important to note that many of these verses that had been removed were referenced in the footnotes at the bottom of their respective pages.

So, is it really that important that these scriptures were removed since many are mentioned in other places or footnoted within the Bible?  Or, is there a dangerous precedent being set since most of these versions of the Bible are relatively new to humanity?

Let’s look at one change that has been made.  In the book of Genesis after both Adam and Eve sinned, God says this to Eve in the NIV Gen 3:16, “Your desire will be for your husband, and he will rule over you.”  This phrase has been recently changed in the ESV, English Standard Versions to say; “Your desire shall be contrary to your husband, but he shall rule over you.”  In this version it suggests that women naturally oppose their husbands’ desire, and thus are responsible for marital conflict.  If we are not careful, translations like this may shape and become the accepted thought about a woman’s role in marriage.

The question becomes this, with so many Bible translations and paraphrases doesn’t it give us more reason to be careful of which one’s we use?  We know the Mormon’s and the Jehovah Witness have distorted the scriptures to validate their personal beliefs.  It is then not too farfetched to see how Biblical scholars who are progressive in their religious interpretation of the scriptures may attempt to be politically correct and change the way God views certain sins.  Even the slightest distortion can over time become the accepted norm and once that foothold is established it can lead us to accepting an even bigger deception later.  Especially, when we see just how frequently scholars can and do change the meaning and intent of the scriptures.

Lord help us remember ‘Your word is a lamp to my feet and a light to my path.’ and may we remember that ‘man shall not live by bread alone, BUT BY EVERY WORD OF GOD’!

(If you enjoyed this article or any of our past articles and know others who may find some benefit from them please pass them along.  We also appreciate your letting us know if you enjoyed it as well so either bless us with a comment or hit the ‘like’ button.)